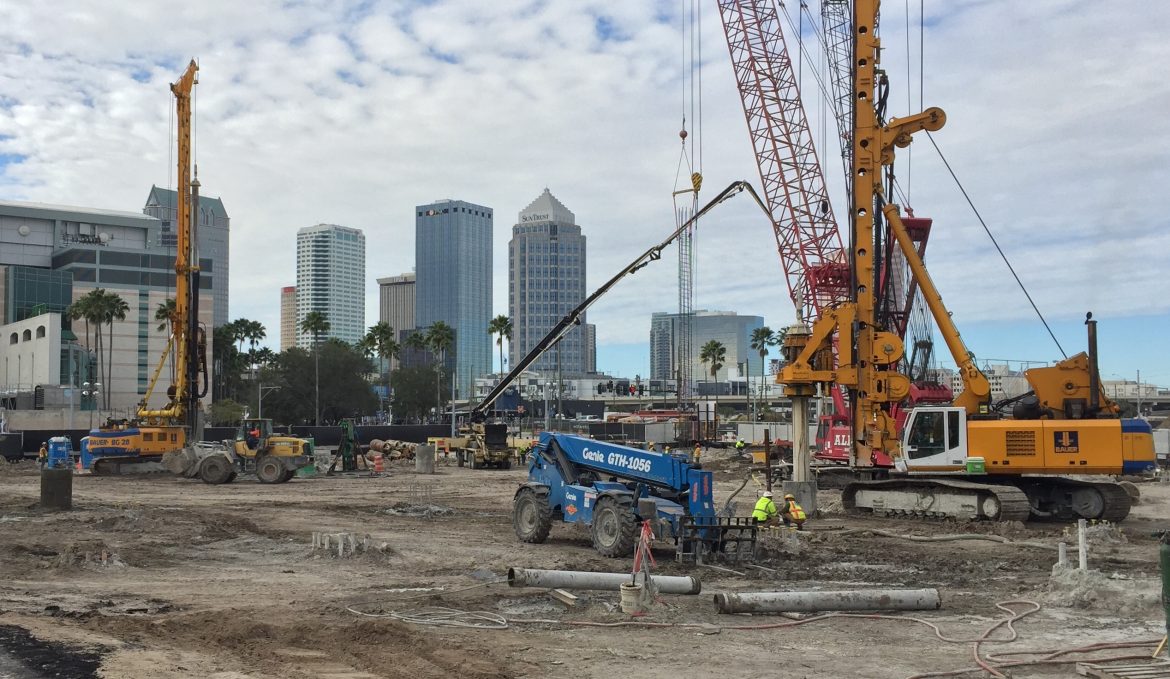 Industry news has been conflicted regarding the economic outlook for 2019. As a company who is in the “trenches” daily working with industry leaders and equipment users worldwide, we believe there is a significant need to reestablish export channels into reliable secondary markets outside North America. Over the last several months OEM Dealers, Trade Association Members and other owners have increasingly expressed concern over their limited options for expected and orderly liquidation of equipment inventories.

Starting the 2019 New Year with the effects of increased Federal Reserve rates, the nuisance of a “Trade War cloud” and record partial shutdown of the US Government: this year is unique to say the least.  The United States GDP annual growth through Q3/2018 was 3.5% and reflected a red-hot construction market widely believed to be unsustainable going back to last summer. Currently, most financial analysts anticipate a pullback this year, nuanced by volatility of consumer confidence and continued uniformity of the pessimism regarding the United States and broader world economy. We agree, believe the US Economy has strong fundamentals and anticipate a soft-landing into a 2.0-2.5% GDP growth range.

The Construction Equipment industry is a leading economic indicator and much has changed since the “malaise of 2007-2011” brought on by a collapse of the US housing market – but much has also remained the same, mainly options. Secondary markets for used construction and earthmoving equipment continue to be limited to the domestic playing field, mainly due to the expensive & cumbersome bureaucracy of modifying Tier IV machines (engines) for export and use internationally with locally available fuels.  The “world region model” that characterizes current OEM behavior does not lend to changes, and manufacturers won’t purposely enable their North American Dealers to engage in this activity.  Void of the historical “safety valve” for exportation of used machinery into Latin America/Caribbean, Africa, the Middle East and elsewhere – owners have a looming problem.

Some aggressive OEM & Independent Dealers are actively fortifying their capability for international trade via acquisition of non-EPA Compliant machines (Tier II, III) from other regions, shipping them to Free Trade Zones (FTZ) within the USA with intent to resell internationally. These players are setting themselves up for future throughput by ensuring their export sales activities are adequately staffed, supported and ready for an increase in business. In lieu of “de-tiering”, they are currently playing the only game available to them as OEM Dealers

Ritchie Bros Auctioneers (RBA), an industry bell-weather, covered 2018 sales targets domestically due to a strong US economy.  We expect their marquee event next month in Orlando will marginally eclipse the record-setting US$278MM of a year ago, which was their first February event post-acquisition of “IronPlanet”.  As a market-maker, RBA has yet to introduce a solution for Tier IV (interim, final) machinery being refitted for export, and thus, shares the experience and consequences of limited international trade in their core asset group.

Meanwhile, our industry continues to suffer as existing trade platforms remain outdated, fragmented and generally inefficient compared to other industries. Fee-based tools and websites which emulate and facilitate age-old behaviors have taken some shallow roots, but it’s not enough. End-users need complete platforms which simplify direct involvement and control in the trade of their equipment (usually their largest single capital expense) at a reduced cost.  Expect “new players” to emerge, challenge and compete in the sale of quality used equipment currently being relegated to local brokers, auction houses, and via trade-ins on the sale of new machinery – options which relinquish significant value as owners do not perceive better solutions.

The next phase of our economic cycle will be the first real observance of a market dominated by Tier IV machines entering secondary markets in North America. We anticipate equipment owners will seek solutions in a new landscape which include an international component.  The low-hanging fruit are machines produced prior to 2012, or, “pre-Tier IV” machines, which generally require no engine modifications for use overseas.  Tier III machines (2007-2011) are perpetually in high demand in a very diverse international market, as are the Tier II predecessors. With our first-hand experience  in the “de-tier for export” process at the OEM level (CAT, Volvo), we are increasingly being approached for discussion by organizations throughout the industry.  Necessity is the “Mother of Invention” on the “de-tier for export” front, and solutions outside the OEM channel do exist.

To learn more about our export and other services click here 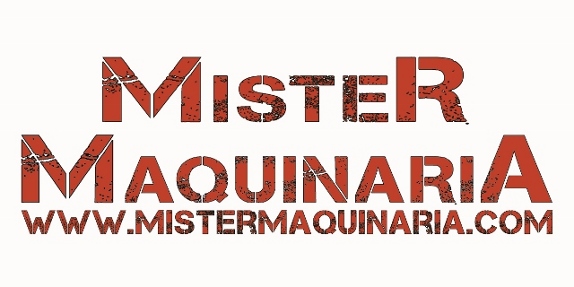 As a “Space Race Brat” born to Parents who lived in Brevard County, Florida & were employed in the Space Industry fresh out of high school (late-1950’s), those insightful parental tech nerds made it my business to engage and leverage technology from an early age (see photo at Pad 39A and Apollo 11, I’m in red). In hindsight, the habitual application of technology has been a fruitful gift.

While Technology, the Digital Age & Social Media have changed most aspects of life as we know it, the construction equipment industry is a prime example of “old habits dying hard”, when secondary markets and participant behavior are considered.  The current landscape is painted with auction houses, dealer-to-dealer networks, antiquated websites, poor marketing platforms and even locals attempting to DIY on Craigslist – as with the “late adopters” of the Space Race, the current state of our equipment industry demonstrates collectively we are some of the last to understand it and use it to it’s full potential.

The fact is, most equipment owners/users are not equipped to manage the marketing and sale of their used iron – they wisely invest their time in estimating, bidding, winning and executing projects, as it should be: but something is missing.  At the end of the efficient life of machinery it is common to accept low trade values, sell machines to intermediaries and auctions: all paying/netting typically 65-80 cents on the retail dollar.  The lack of in-house staff and supporting network charged with creating increased net worth for machinery assets affects competitiveness for contractors and other owners/end-users.

Mister Maquinaria has now “gone live” with our website and set to leverage the power of our global database for email marketing, extensive use of digital and social media platforms & iPhones that have more computer power than Apollo 11 when it launched in July 1969.

Contact us at your convenience to discuss your specific needs – let’s launch a partnership to increase returns on your equipment! 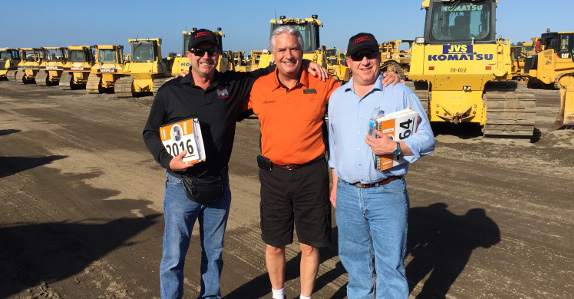 Ritchie Bros Orlando sets records across the board in February

The final result: US$278 Million in gross auction sales, all unreserved – Ritchie Bros Auctioneers did it again and set market values across 12,500 lots of construction equipment over six days.

As expected late-model, low-hour gear was in high demand for domestic end-user’s as the US Economy remains strong – sellers have the advantage in the marketplace on all platforms as supply is squeezed.

Latin American, Caribbean and other International players showed a resurgence of this buyer-base, swarming the Tier III gear, rarely being outbid during the week.

Ritchie Bros has some tweaks to make – it comes with the territory – but considering the impact last year’s acquisition of Iron Planet had on sale volume they pulled it off well, congratulations on a great event!

Mister Maquinaria is ready to assist international buyers in locating and purchasing the machinery from reliable sources in the USA – contact us and let’s talk machinery and exporting! 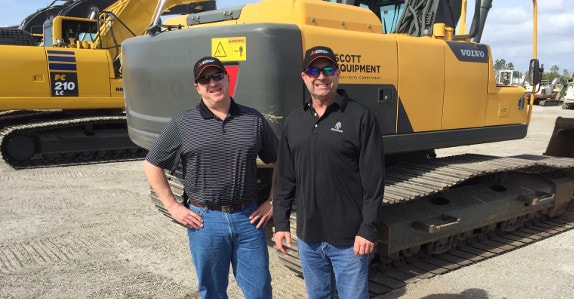 Three weeks ago we were onsite checking out the iron and the gross sale estimate was $195MM, now that’s been obliterated with the latest estimate rolling in above $275MM – apparently RBA & IronPlanet are “Better Together” as the early media tagline suggested. If the primary goal is volume then this should be no surprise, be ready to reset your marks as the previous high was $203MM in 2012.

Who will be there and what should we monitor to better understand our market?

Late-model, low-hour gear will serve to quench the domestic end-user’s appetite as the US Economy remains hot, providing sellers the power position in the marketplace. We believe prices will be retail (as is typical) and the spectacle of the environment will certainly provide some bidding behavior of note.

Expect to see Latin American, Caribbean and other International Buyers swarming the pre-Tier IV gear, rarely being outbid: a resurgence of this buyer-base.

During the sale and after the dust settles a hot topic will be the simultaneous sale of iron sold “as-is” with descriptions on the RBA Orlando Yard versus the online offerings of remote equipment complete with IP-style inspections. Suffice to say Ritchie Bros will intensely monitor the results, attitude of their clients and trends – as will we.

Look for Mister Maquinaria staff all week and let’s talk machinery and exporting! 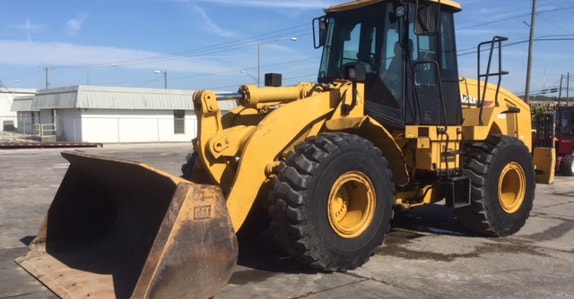 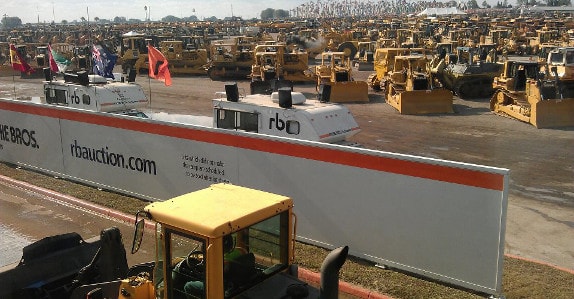 A rare buying opportunity is currently available with Lease Returns in the USA. In the past few years many contractors have elected to take advantage of the attractive leasing options offered by manufacturers and dealers all over the Country. As leases reach their end large volumes of machinery are coming available each month in the USA.

Inherently these lease return machines are Tier IV-interim and prices are depressed across all makes and models, presenting overseas buyers with an excellent opportunity to “De-Tier” these machines and the glut in the USA market. In my opinion the best-case scenario is exportation of such units to overseas markets needing good quality machinery at reduced pricing.

It is clear some customers are taking advantage as we have seen examples of contractors from Mexico, Central and South America obtaining machines through various sources, “de-tiering” and putting them to use alongside other machines acquired through dealer channels.

We are interested in hearing about your experience, that of fellow contractors in your Country and interest in this relatively easy process. Let’s begin the discussion!