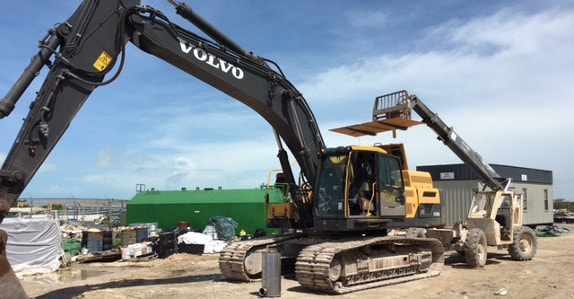 Turks & Caicos (Summer 2016) – It’s brutally hot most summer days and sometimes unbearably humid in the Islands of the Caribbean, but the perpetual challenge for builders/developers is lack of dealer support on this outlying archipelago. While the dealer in the Dominican Republic was the “dealer of record” for this Island Nation, they have no brick and mortar operations there, and no Service Techs with VISA’s to enter the Country: we stepped in and filled the void.

Our customer needed to acquire a late-model machine to fulfill their dire need of a 30+ Metric-Ton excavator – we provided this Volvo EC340DL (Tie IV-interim) and the support required to ensure it would function as intended, thus our first “de-tiering” project was slated and planned.

The process was only complicated by some on-site broadband and cell coverage issues, which were expertly managed and overcome by our team. Reprogramming of the ECU was then an easy final task.

One year on this “de-tiered” hydraulic excavator is working as intended and meeting the needs of our customer with no reported incidents…who’s next?